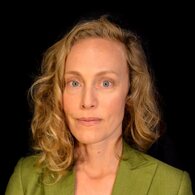 ABOUT:
Bernadette is a multi-disciplinary artist who works with writing, theatre, film, animation, painting, sculpture, spatial design and installation. Her practice focuses on narrative processes and is often site specific. She works in urban and remote areas with individuals, artists, educators, scientists, Aboriginal Ranger groups and communities from diverse cultural and linguistic backgrounds.

She lives and works on the lands of the Wurundjeri people of the Kulin Nations, on the lands of the Goolarabooloo, Yawuru, Gooniyandi, Walmajarri, Wangkatjungka, Bunuba, Kija, Karajarri, Nyul Nyul and Bardi Jawi people. This work takes place on stolen lands, sovereignty was never ceded.

In 2022 Bernadette won the Shinju Matsuri Art Award Painting Prize for her work 'Live Transmission'.  Currently she is producing 6 animations with Wudjari artists and elders from Kepa Kurl/Esperance about their relationship with Sea Country. In 2022 she was lead visual artist and animator for 'This Is Mo'Ju' commissioned for the ABC 'Rap It Up Series'. Her theatre work 'Phantasmagoria' - developed in Broome, Perth, Melbourne and Iceland – premiered at Theatreworks in Naarm (Melbourne) in March 2022.
In 2021 her collaborative animation with Senior Gooniyandi artist Mervyn Street was commissioned for an exhibition at the WA Museum Boola Bardip. She was lead artist and animator for the award winning documentary 'Message of the Lyrebird', produced by Balangara Films. Her collaborative animation 'At First Sight' with Miriwoong artist Peggy Griffiths-Madij was screened at the Perth Institute of Contemporary Arts, at the Australian Cinematheque - Queensland Gallery of Modern Art and at the Art Gallery of South Australia for Tarnanthi in 2019.
In 2020 she produced the Kimberley Coronavirus animation in collaboration with Kimberley based Aboriginal artists, the Kimberley Aboriginal Medical Service and Nirrumbuk Environmental Health and Services. The animation was translated into five Aboriginal languages from the Pilbara and Kimberley. It screened on NITV, reaching over 30,000 people online and played in medical clinics across the Kimberley and Pilbara. She  produced a video clip for Melbourne band 'Great Aunt' for their new release 'Oh won't you save me'.
In 2019 her illustrations were commissioned by the WA Community Arts Network for the Noongar 'Lullabies' album artwork and she worked with ScreenWest and Ballardong Wadjuk Yok/Walyalup artist Yabini Esther (Kickett) McDowell on animations for the Yagan Tower screen space in Perth. A series of 6 animations she produced with Gija artists from Warmun Arts Centre were exhibited at the Art Gallery of WA, commissioned as part of the Desert River Sea program. She undertook a commissioned residency at the Allerhandverein Arts Centre in Mecklenburg-Vorpommern region, Germany in August 2019.
In 2018 she undertook the Master of Writing for Performance at the Victorian College of the Arts. As part of this study she worked under Sibyl Kempson, an award winning writer from New York, USA.
In 2017 she held a solo exhibition of her paintings as part of the Broome Fringe Festival. In 2016 she spent 2 months at the NES Artist Residency, Iceland, where she undertook a creative development for her theatre and image making practice. Her illustrations have been published in 3 editions of of the comic anthology collection ‘Tango’ edited by Bernard Caleo, and in the Tango Collection 2009, published by Allen and Unwin

She has toured regionally and internationally with Big Mama Productions, Theatre Kimberley and the Snuff Puppets. Her film and animation work has received awards from The Heart of Gold International Film Festival, has been broadcast on ABC, ABC Asia, NITV and SBS. She works collaboratively in theatre, film and visual arts with organisations such as the Kimberley Aboriginal Law and Cultural Centre, Warmun Arts Centre WA, Mangkaja Arts WA and Waringarri Aboriginal Arts Centre WA, Arts Access Victoria and Arts Project Australia.

Patient : Sculpture/installation for the Melbourne International Food and Fine Festival
Feast your eyes on this - Epicure - Entertainment - theage.com.au